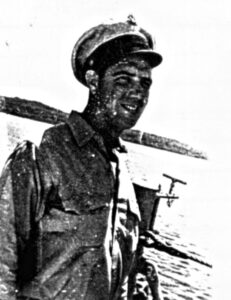 Charles E. Faught served aboard the USS Denver for a time.

Services have been held in Madison, Fla., for Navy Chief Warrant Officer Charles Edward Faught, former Memphis and Covington, Tenn., resident, who died of a heart attack at sea. Burial was in Oak Ridge Cemetery at Madison.

Mr. Faught, who was 39, died May 25 aboard the fleet tug Catawba which was en route from Norfolk, Va., to New London, Conn. Executive Officer of that vessel, he had just transferred from the Navy troop transport Botetourt which was decommissioned.

Born in Covington, Mr. Faught joined the Navy in 1936. He was a Methodist.

Funeral services for Chief Warrant Officer Charles Edward Faught, U.S. Navy, who died suddenly May 25 aboard the USS Catawba at sea, were held at 11 a.m. Wednesday in the chapel of the T. J. Beggs Jr Funeral Home, Madison. Rev. Edward Herndon officiated at the religious ceremony. A military service followed with interment of the Methodist church.

Your ticket for: Charles E. Faught