By Sherri Onorati, Special to The Leader

It’s said that only six percent of Scouts will ever make it to the rank of Eagle Scout. It takes at least 21 merit badges, a significant service project and a commitment to leadership. Since 1912, when Arthur Eldred of New York first earned the coveted Eagle Scout Award, only two million have attained the Boy Scouts of America’s highest rank, but this past weekend’s work will have two more young men soon herald into that elite community.

For Scouts working towards their Eagle Scout badge, an Eagle project is an opportunity for a Scout to demonstrate leadership while completing a project for the benefit of their community. 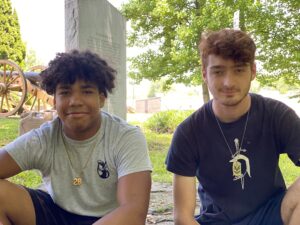 Ward, a freshman, and Grott, a junior at Covington High School, liked the idea of replacing over 1,000 feet of fencing at the Tipton County Museum as a possible Eagle Scout project.

“I saw the wear and tear of the fence,” said Grott. “Especially, after the past two ice storms had knocked some fencing down and I felt like it really needed to be done.”

Partnering with Home Depot and the Home Depot Foundation who donated and supplied the $10k worth of material needed, the boys broke the project down into two sections. Grott was responsible for replacing the Museum’s 860-foot fence line that ran alongside Bert Johnston Ave., and Ward was responsible for all the fencing around the Museum’s parking lot – fencing that had been installed more than 20 years ago when the Museum first opened.

Before the project could start, Ward and Grott had to work together to iron-out the final details, enlist workers to help with the build, ensure they had enough materials and plan their execution to safely accomplish their goal.

“I think they did a great job in selecting [the project],” remarked Underwood. “It’s something the community needed, and it added a lot of flavor to the site. It was a much bigger project than they expected, but they have really mustered up the energy and the courage to get it done.” 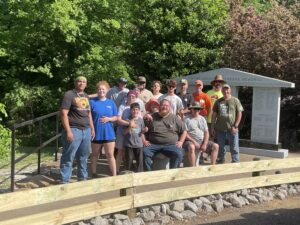 Due to the enormous scale of the project destined to be completed in one weekend, the Scouts had to recruit lots of help. Scouts from Troop 61 and Cub Scouts from Pack 61, parents, friends and local Home Depot employees were all on hand to provide assistance and Home Depot of Covington provided lunch for everyone.

When asked what he liked most about scouting and working together, young Ward, grandson of Nancy Ward of Covington, replied, “It’s a community and I’ve got friends all over. Some friends who live in suburbs and some who live in country and they’re all different and that’s okay. It’s a brotherhood, like I probably would never have talked to AJ if not for scouts,” he added with a smile.

With several veterans in his family, Ward said completing his Eagle Scout project at the Tipton County Museum meant a lot to him.

“I’m really proud I got the opportunity to do this. Scouts was meant to be sort of a military-type program for younger kids and I have always had the upmost respect for all veterans and anybody who serve our community.”

Grott, the son of Patrick and Jayme Grott of Covington, also comes from a long line of military veterans.

“Both my grandfather, grandmother and my great-grandfather have served, and I have family in law enforcement,” said Grott. “The Veterans Museum has always played a big part in my life living here in Covington. It’s been sad seeing the stuff in disrepair for so long but it’s good to see it getting some TLC now. People will see this [scout] project and more people will feed into Boy Scouts as they see this as an opportunity to do good things for their community.”

“This is such a much-needed improvement,” said Tipton County Museum Director Katherine Markley. “I’m completely speechless and amazed with the work done. It’s truly a beautiful thing to have our younger and older generations working together to benefit our community.”